The turn sequence and observation table

Example unit data card. Numbers and layout may change as new info/ “clean up” is founf/continues. 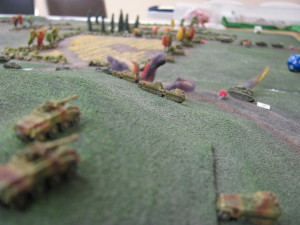 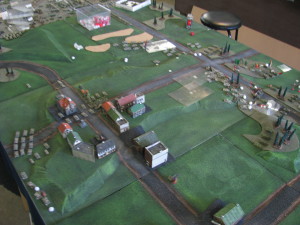 Frangible is what used to be a set of house rules for using 6mm Micro armour as a military training aid.

Frangible is a 1-1 scale game (1 vehicle = 1 vehicle). It is intended to comfortably play Battle Group level ops (100-200 vehicles/ infantry squads per side). More can be played, but turns slow down.

It was influenced heavily by Challenger, Contact, Fist Full of Tows, Steel Panthers, WRG and a host of others.

The game, in general has been sped up and simplified. It is suitable for 1930 to 2130. The corp rules are designed to be used regardless of the era. Unit Data cards are variable and vehicle capabilities give the “flavour” of the time period.

We are still Beta testing the rules and filling in gaps.

Sci Fi vehicles and equipment can be “translated” into a modern reference and used for those wanting to reuse Epic, Renegade Legion and Battle Tech minis in other roles.

At present, we have had to shelve most of our modern data sheets since the known data has changed and we are compiling new stats. WW2 and 1960s era data cards will start being posted shortly.

We would welcome contributions (we are trying to draw from multiple sources and “average” the results). The size of an 80% zone at various ranges/ equivalent armour protection and weapon penetration at various ranges and or Probability of Kill (PK) calculations specifically.